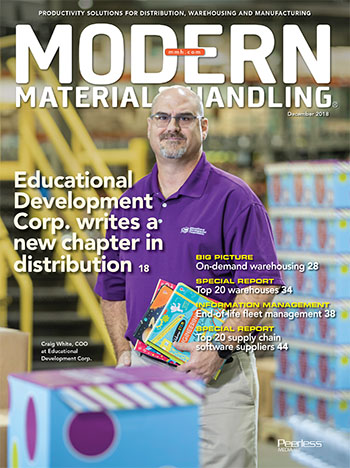 The company, which sells books to stores like Barnes & Noble and through a direct-marketing sales channel of independent consultants, had to reinvent its distribution operations following an explosion of growth from 7,000 to more than 30,000 consultants. Additionally, the company had switched from shipping mixed cases to the consultants to direct shipping of small orders to the consultants’ customers. The new, 150,000-square foot space now features more storage space and allows orders to get out the door far faster than before, with the typical order having severn line items.

The pick-to-light units are located on three conveyorized picking lines with 14 pick zones apiece. To start the picking process, an associate first scans the bar code on the order and on a tote at the induction station of each pick line to pair each order to a unique tote. After placement on the conveyor, each order tote tote travels to the first camera to read its bar code, then queries the pick-to-light system to determine if any picks are in either of the two zones the tote just passed. If so, the tote is diverted to the designated side of the first pick line and the appropriate zone. After all the items from that side of the pick line have been selected, the tote is pushed back onto the powered center conveyor. It then returns to the first camera which determines if it needs to be diverted to the other side. If not, the order tote proceeds to the next camera. The process repeats until it has made its way through the entire pick line.

The full article can be read, here. The piece also includes a step-by-step diagram with callouts explaining each step of the distribution center’s operation, found here.