When its Pick-to-Light system kept breaking down, hair-care products manufacturer Goody knew it was time to update its equipment.

A 2006 retrofit solved the problem while boosting productivity and accuracy.

For three years, it happened again and again. Picking operations at Goody Products Inc.’s Columbus, Ga., distribution center came to a halt because of some sort of maintenance problem with its Pick-to-Light system. A light would go out, a scanning gun wouldn’t read correctly, or a gun would lose its programming—and the entire system had to be taken down so it could be fixed.

“It cost our company a tremendous amount of lost labor through those three years,” says Dean Shaw, the company’s senior fulfillment supervisor. But downtime or no, the work still had to get done. Goody, a $160 million manufacturer of barrettes, hair bands, brushes, and other hair-care accessories and styling tools, could not afford to ship late—not with Wal-Mart as its biggest customer. “Wal-Mart doesn’t understand if you tell them you’re having system problems; they couldn’t care less,” says Shaw. “They just want the product in their  distribution center.”

A high-maintenance system
Perhaps the biggest problem with Goody’s old Pick-to-Light system was that it wasn’t designed for easy maintenance. When a problem cropped up, it couldn’t be diagnosed or resolved by Goody’s own employees. Instead, the vendor would have to dial into the company’s server and oftentimes, would have to shut down the entire system to find the problem.“We have 36 zones, and if one [scanning] gun wasn’t effective or wasn’t being consistent, instead of identifying what number gun and what zone it was in, we would have to knock out the whole system and then take it up, drop by drop by drop, to figure out where the problem was,” Shaw recalls.

Once the problem was discovered, Goody would then have to wait for a technician to come to the distribution center to fix it, even if it was something as simple as replacing a light. “Maintenance on it was unbelievable,” says Shaw. “It was a wired system that was really difficult to troubleshoot.”

Maintenance was only the half of it. There were other problems with the system as well. For example, the scanning guns it used were tethered, rather than cordless, models, which meant they could only be used in one zone. The system also had its limitations when it came to indicating multiple picks in a single zone—because the system was only able to handle sequential picks, the indicator lights would light up one at a time instead of all together. Plus, the quantity to be picked was displayed on a central bay station instead of at the pick slot.

This configuration required pickers to look back and forth between the pick location and the central bay, increasing the likelihood of mistakes and slowing workers down.

The system also had its limits when it came to diagnostic and reporting capabilities. For example, it could only store productivity and quality data for a few days, making it difficult to track employees’ long-term progress.

Instant results
Once the new system was up and running, the maintenance issues disappeared. Goody’s own employees can now repair many of the problems that used to hold up operations. They can change lights on the fly, batteries are easy to replace, and if a gun loses its programming, any employee can reset it simply by doing two scans.

“It’s much more user-friendly in terms of maintenance,” says Shaw. “You don’t have to spend time waiting around for a technician to arrive. Instead you can now take down the specific zone where the problem is, and picking can continue in the areas around it.”

On top of that, the system’s design has greatly reduced downtime and improved productivity. Now when there are multiple picks in one zone, they light up all at once, a change that boosted picking speed. Plus, the quantity to be picked now appears right at the picking slot.”The hourly employees like the fact that they do not have to look away from the pick slot. This made them a little more accurate,” says Shaw. “Of course, our expectations for their accuracy levels have also increased.”

The new system’s design has even made it easy to learn—something that’s particularly important to Goody, as the company uses a lot of contract labor in its distribution centers.

Freedom to move and improve
Installing the new pick-to-light system also gave Goody an opportunity to make a technological leap, updating both its hardware and its software. One big change was the switch from tethered scanning guns to cordless ones. The new guns can be used in multiple zones, giving a greater range of coverage and more freedom of movement. “Supervisors and managers no longer have to ‘jump rope’ as they move through the facility,” reports Shaw. 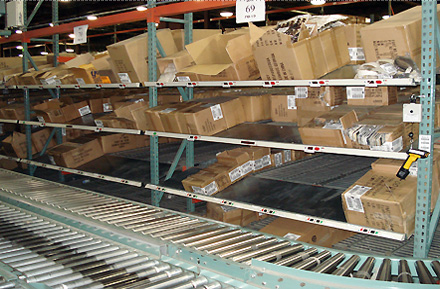 Managers and supervisors now have better reporting capabilities, and they receive alerts when there are potential problems. For example, the system notifies Goody by e-mail when inventory at a particular location runs low and needs to be replenished. Every two hours, it reports on whether the DC is maintaining the necessary picking performance levels, and Goody now can get statistics on individuals’ productivity. “There are charts that show us by user whose productivity has been steadily increasing, who’s plateauing, and who’s not coming along,” says Shaw. “This provides a useful tool for managing the workforce.” 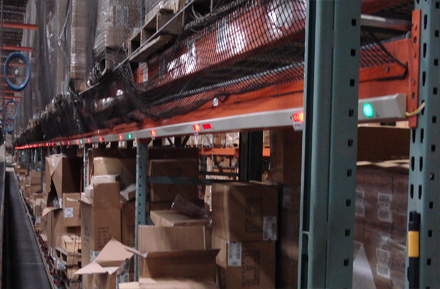 By all accounts, the new system has had a dramatic effect on Goody’s operations. As it turned out, Shaw’s worries about raising productivity were unwarranted: The distribution center saw a 23-percent increase in productivity, more than double the level promised to management. At the same time, accuracy rose from 98.94 percent to 99.35 percent, based on Goody’s routine inspections of 19 percent of all cartons leaving the picking area. The implementation has been so successful at the Columbus DC, in fact, that Goody’s parent company, Newell Rubbermaid, is planning to install another of the pick-to-light systems at its Southeast regional distribution center in Atlanta.

Goody’s only regret may be that it didn’t install the new system sooner. Shaw urges others to learn from his company’s experience and not wait so long to replace aging equipment. His recommendation: “If you are having problems with your existing system and determine you are going to replace it, move aggressively forward and get it replaced.”