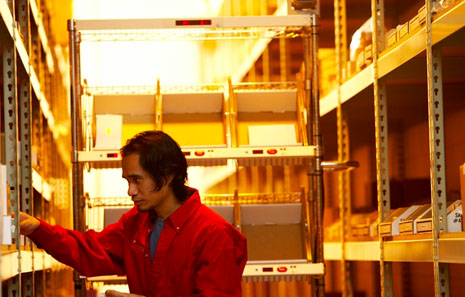 In warehousing and distribution applications, particularly for piece-picking operations and e-commerce (where one- and two-line orders are common), specialized carts can improve productivity. That’s because they allow a single picker to fill several orders at the same time during a single pass through the warehouse, while following the shortest route.

Equipped with handheld radio-frequency (RF) scanners and voice- or light-directed picking technologies, these pick carts allow an operator to pick from stored inventory into labeled slots or bins engineered into the cart. “Because they support batch picks of multiple orders simultaneously, mobile picking carts dramatically increase picking speed by up to 200%, while improving worker ergonomics by reducing the number of trips through the warehouse,” says Bernie McCabe, sales force manager for Lightning Pick, a part of Matthews Automation Solutions.

For example, when the picker arrives at an assigned storage area, the cart’s light-directed picking modules indicate the picked items that should be distributed to each bin riding on the cart, McCabe says. To improve accuracy, items can be scanned to confirm the correct pick and placement in the right bin. “This cart-based batch picking process can increase picking speeds up to 40% over conventional, paper-based picking, and reduce travel by up to 70%—depending on the order profiles,” he says.