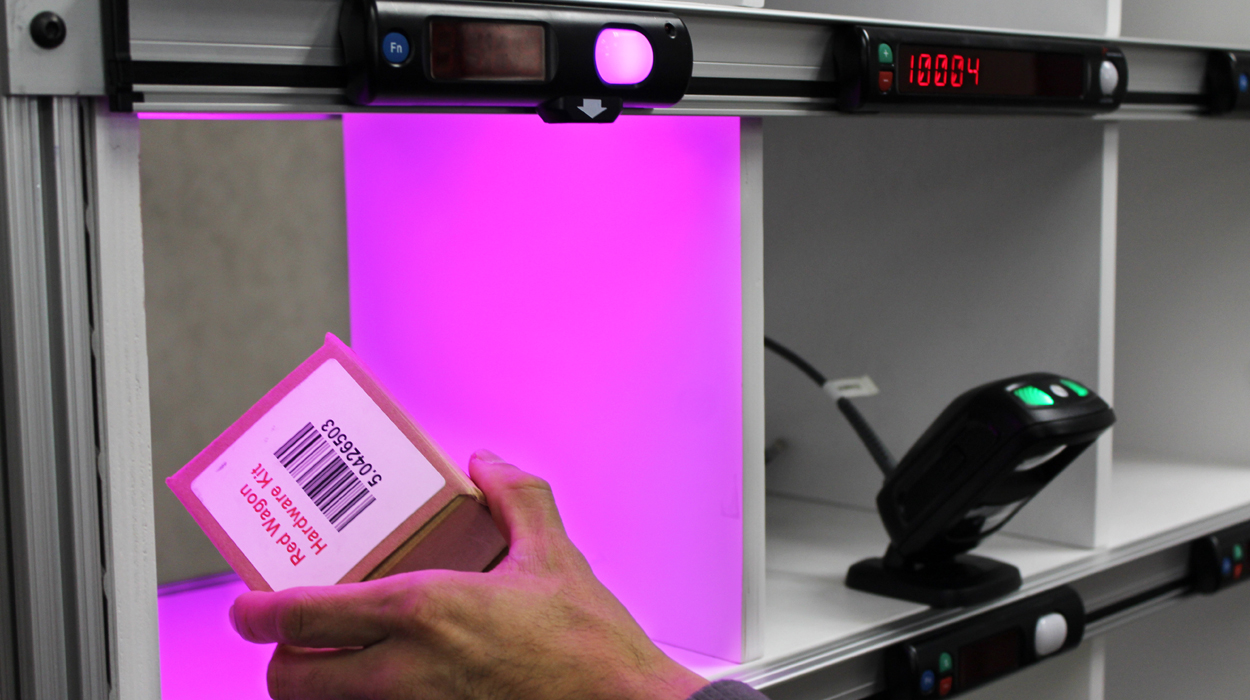 GERMANTOWN, WI (March 4, 2017) — Lightning Pick, a Matthews Automation Solutions’ brand, and will debut two new innovations to further increase speed, accuracy and throughput when sorting batches of picked items into put walls. Each destination cubby in dual-sided, light-directed LP Put Wall systems can now be specified with LED lighting and/or a photo-eye sensor for touchless task confirmation. Both features will be on display at ProMat 2017 in Booth S1023b in McCormick Place’s South Hall.

Space-efficient and economical, LP Put Walls utilize light-directed picking modules for high-speed, automated batch sortation. They optimize batch and wave picking—as well as high-speed, one- and two-line order sortation operations—with a process sometimes called “pick-to-light in reverse.” Constructed as a series of shelves that have been divided vertically into multiple cubby openings (or that hold empty bins or totes), each space represents a unique customer order. In addition to their use in order fulfillment, LP Put Walls are also used in returns processing, secondary batch pick sortation, kitting processes, putaway, replenishment and order consolidation applications.

“In the past several years, we’ve seen a big jump in the number of put-to-light systems we’ve installed across multiple industries, including omni-channel and e-commerce retailers and within manufacturing operations,” explains Jim Bast, Vice President and General Manager of Lightning Pick. “That’s because utilizing put-to-light technology speeds up picking productivity from rates of 60 lines per hour to as many as 400 lines per hour, while pushing post-sortation order accuracy to nearly 100%. Since we do so many of these systems we, encounter opportunities try out various innovations that enhance our customers’ overall system performance.”

Placing LED lighting inside each LP Put Wall destination cubby—in addition to the standard light-directed picking modules mounted on the face of each opening—helps order fulfillment operators sort faster. When a tote of mixed products arrives at a put wall, the operator removes the items one at a time, scanning each barcode.

Because both the modules and the LEDs are connected to the same hardware platform, the scan triggers the light modules and the optional interior LEDs to illuminate simultaneously to direct correct item placement. The additional brightness makes it even more obvious to operators in which cubby to place the item. It also enhances overall workspace visibility. To optimize the visual cue, the LEDs may be specified in different colors to best match or contrast with the light modules or put wall finish.

Equipped with a photo-eye sensor, the new touchless task confirmation feature for LP Put Walls speeds up batch picked order sortation for faster fulfillment. By eliminating the need to touch a button to confirm item placement in its destination cubby, operators can sort more products in the same amount of time. The option may be specified for installations using Lightning Pick’s MW2040FE series light module and gives users two choices for task confirmation:

“The touchless task confirmation gives offers users the ability to run their put process in either push-button or touchless modes, so they can experiment with the put validation methods best suited for their unique fulfillment process,” says Mike McManus, Engineering Director for Lightning Pick. “It can also be implemented with other optional system features, such as the in-cubby LED lighting to illuminate the entire destination cubby, and an active light module that gives operators additional sort direction and better task visibility.”

Lightning Pick’s two new LP Put Wall features can be seen in action in Booth S1023b throughout ProMat 2017 in Chicago—April 3-6, 2017. For more information, contact Elena Kruesel at 262.250.2169, or by email at [email protected], or visit lightningpick.com

In addition to Lightning Pick, the Matthews Automation Solutions’ ProMat Booth S1023a will feature its other brands Holjeron and Pyramid.